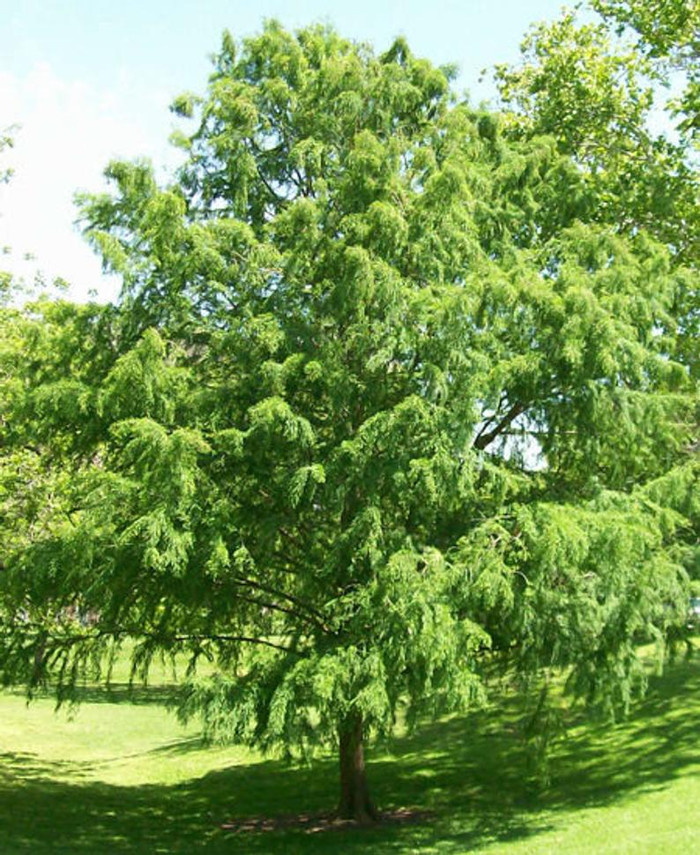 Product Code: BCT
Please enter
zip code
to know if this product is suitable for your location or not! Your Zone:
change my zone
USDA Zones 4-9

The Bald Cypress tree, Taxodium distichum, is one of the classic Southern shade trees. It is an adaptable species that grow in various soil and climate conditions across the United States. It is the Louisiana state tree, and due to its popularity, it is a native Midwest conifer.

As a newly planted tree, it takes on a pyramid-like shape that changes adulthood to a columnar shape. Depending on where you live, Bald Cypress trees take on the following appearance:

• Leaves: needle-like with a couple of twigs in a row. Its leaves are between ¼ to ¾ inch in length. They are green in color but will turn reddish-brown in the fall. The leaves will shed in the fall but remain attached to the twigs.

• Bark: the bark can be both gray or a lovely cinnamon brown. The bark is flat and can be peeled off in fibrous, narrow strips.

• Cones: The Bald Cypress cones are not typically looking. Their cones are more round in structure and are about one inch in diameter. The flowers appear in the spring between March and April. Cones are both male and female Bald Cypress Growth Environment

Bald Cypress trees love lots of sunshine. They grow happily in any soil along with low to moderate water levels. As a result, this different conifer does well along riverbanks, swamps, and dry land.

The roots of the Bald Cypress are horizontal and grow just below the surface. For this reason, it grows upward from the ground or standing water. Its famous swampy appearance is noted throughout southeastern states, and its roots help anchor the tree sturdily.

The Bald Cypress tree can grow up to 30 feet tall with a width of 35 feet.

There has been an older Bald Cypress that grew up to 100 feet. It grows strong and slowly in most locations at a rate of 24 to 36 inches a year. As a result, it can live for more than 600 years.

The oldest Bald Cypress tree was in the state of Florida. It was nicknamed "the Senator." Its estimated age was at 3500 years, and it is the 5th most giant tree worldwide. Unfortunately, the Senator was destroyed by a fire in 2012.

The Bald Cypress gets its name because it sheds its leaves earlier than other conifers. In appearance, this tree species (Taxodium distichum) is very majestic and brings curb appeal value to any property.

As a conservationist, the Bald Cypress is a valuable plant life for watery environments. For example, its seeds feed wild turkeys, ducks, water birds, and squirrels. Amphibians like frogs, salamanders, toads use the Bald Cypress to breed, as do catfish. Birds of all types nest in their treetops.

How To Plant a Bald Cypress Tree

If you would like a Bald Cypress on your property, it grows well in yards and many urban streets. It provides shade as a beautifully landscaped tree. Many homeowners plant the Bald Cypress from seedlings because it is maintenance-free.

As a homeowner or gardener, it is suggested that you do not plant lawn grass close to the Bald Cypress. The reason is that there will be negative competition for water between the grass the tree, which will stunt the tree's growth spurts.

A positive feature of planting Bald Cypress trees is that they do not cause damage to your building's foundation. Because its roots grow deep and do not decay, multiple Bald Cypress trees are often used as landscaped fencing. But it would help if you watched its knees or roots as you mow.

Planting a Bald Cypress is easy. Just plant its seedlings in a sunny area. The soil environment should support good drainage with constant moisture content. As previously noted, these trees are self-sustaining habitats. They are essential to wildlife, and it helps to keep the soil environment contained.