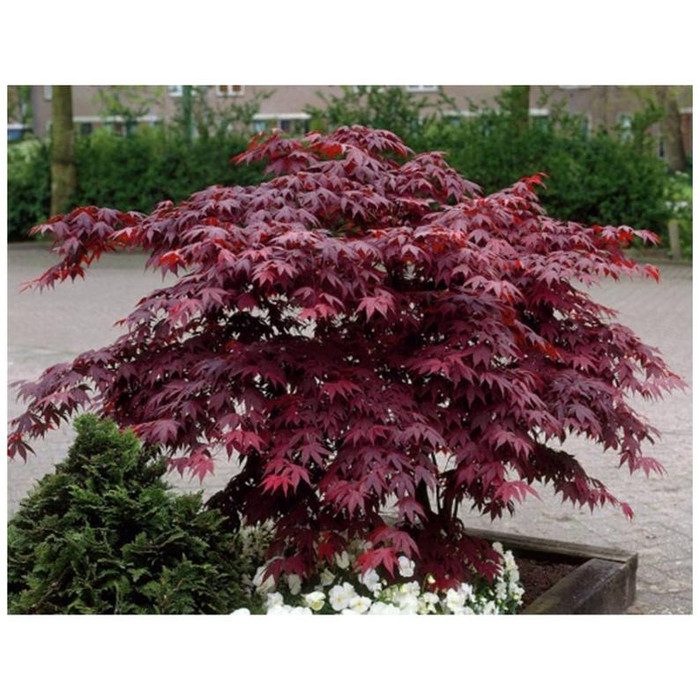 Product Code: BJM
Please enter
zip code
to know if this product is suitable for your location or not! Your Zone:
change my zone
USDA Zones 3-9

The Bloodgood Japanese maple tree, Acer palmatum, works very well for smaller size yards. The trees are most commonly used in bonsai and also as specimen trees. You'll notice that the red in the trees' foliage becomes brighter during spring since that is when it blooms. When it gets to summertime, the color becomes darker or changes to burgundy. However, throughout summer, spring, and autumn, the foliage is still beautiful.

The Japanese maple tree has a lovely branching pattern. The leaves align and form a canopy that's rounded. It features several sub-trunks and not just one leader. The closest comparison to the leaf shape of the tree is that of a marijuana plant. It has palmate foliage in which the lobes come from a central point.

Growing the Bloodgood Japanese maple tree during fall is highly beneficial since it will get new root growth during the dormant season. When the temperatures are not below freezing during fall and wintertime, the tree roots will grow. Another good thing about growing the Bloodgood Japanese maple tree during the fall season is that all the carbohydrates produced during summer go to the root growth. This is because there isn't much demand from the top of the tree since it doesn't grow in late winter and fall.

You can also decide to plant your Bloodgood Japanese maple tree during springtime. However, if you choose to do this, you'll have to be very careful not to interrupt the tree parts that have already broken bud and develop new soft growth. Mulch plays a significant role when you're growing the Japanese maple tree. It helps ensure moisture retains in the roots by protecting them from the heat during summer and the cold.

Deciding to stake the tree when new roots are developing is a good idea. It will stop it from being rocked back and forth by the wind. After the first year, however, you should make sure you take out the stake or change the tie if you notice it's starting to cut into the bark of the maple tree.

The soil you use shouldn't be too clayey. It should be able to drain well. Use loose mulch-like pine needles to help with moisture retention. The mulch should be placed away from the trunk of the Japanese maple tree. Place mulch again around the same time every year.

Bloodgood Japanese Maple for sale at our Nursery!

You can water the branches and leaves of the Bloodgood maple tree semi-regularly. When the weather has been scorching and dry for a long time, you should only water the roots. Soil saturation causes the roots to rot.

The ideal exposure for the Japanese maple tree is in dappled shade. However, even a bit more shade won't harm it. The leaves will develop a little green when exposed to full sunlight during summer.

It's not a good idea to fertilize this tree more than needed to make it grow faster. You should add a reasonable amount of slow-release fertilizer to the soil before the leaves emerge in spring. Afterward, continue fertilizing it every year when you add the mulch.

Ensure you plant it where it won't be exposed to strong winds. Avoid areas that are hot and arid. Strong winds dry out the soil. High heat leads to distress on the tree.

Prune the tree when it's still young to develop a specific branching pattern. When it matures, you can only remove branches and suckers that are dead when pruning.

The Bloodgood Japanese maple tree is usually immune to pests and diseases. Most insects that are a problem to it include borers, mites, and aphids. Give the soil time to dry out between watering sessions to avoid diseases such as root rot...

The Bloodgood Japanese Maple is a non native tree.