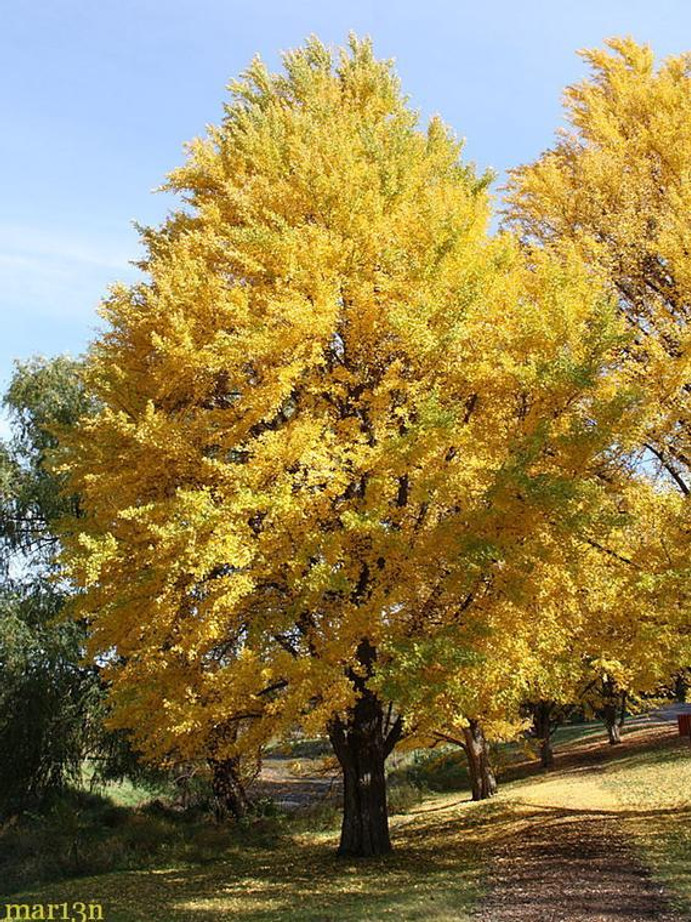 Product Code:
Please enter
zip code
to know if this product is suitable for your location or not! Your Zone:
change my zone
USDA Zones 3-9

The tree is a living fossil, an ancient species from there a hundred million years ago. Ginkgo comes from Chinese yin xing, which means silver apricot. The name maidenhair is European; it is the tree leaves' similarity to a native maidenhair fern. The Ginkgo Biloba Maidenhair Tree grows best in full sun, especially in the North.

The tree grows with average water needs, and it withstands road salt and pollution. It is a salt-tolerant plant, which makes it suitable for landscapes near oceans. Although the tree is a distinct species, it is still beautiful among the deciduous trees. The tree's habit is dense pyramidal in its early life, but it changes irregularly over time. The leaves are rich green and become yellow during the fall, it has the shape of a fan, and the tree has a spreading canopy. The tree has an exotic charm, and as a shade tree, it tolerates the factors of urban conditions. The lifespan of the tree is around three thousand years. Historically, the tree is the only surviving among a group of ancient plants.

The tree grows in full sun, well-drained, both acidic and alkaline soils, and average moisture. The tree is naturally free from pests and diseases, and it is a perfect specimen tree tolerant to harsh environmental conditions. It grows up to 1100m attitude. The tree also transplants with ease, and it is native to China.

Traditionally, the tree is a source of food and medicine. According to the Buddhist religion, the tree is sacred and present on temple grounds.

The tree's bark is grey and furrowed, and every tree has one sex of flowers, which could be male or female. The female flowers are dioecious, and the male flowers are drooping. The female flowers are smaller than the male, and they hang about four centimeters while the male hangs eight centimeters. The male cultivars are fruitless and have a lot of different shapes and sizes. Fertilization takes place through wind pollination. The tree fruits mature during autumn, and they are drupe-like; their color is light yellow, and when they decay, they are purplish-black. As the fruits ripen, their smell is like rancid butter. The fruits of this tree are messy and stinky. The outer flesh is smelly but encloses delicious nuts.

How to the Ginkgo Biloba, Maidenhair tree.

According to research by the University of Florida, the Ginkgo tree takes about twenty years to mature until it is possible to distinguish its sex. Although the tree is native to China, it grows in other areas with high temperatures and deep soil. The roots of Ginkgo trees grow more in-depth into the surface than other trees. The tree is narrow in its early growth years, but it grows more expansive as it continues to age. The tree mainly grows in sandy soil, and it is a perfect choice for landscaping. You should avoid planting the tree near the house or driveway.

The tree is so healthy, and it survived the bomb attack at Hiroshima. However, they grow slower, and they need staking during saplings, but as growth continues, staking becomes irrelevant, and you can transplant them easily. The setting should be deep, less finesse, and drained soils when planting a Ginkgo Biloba Maidenhair Tree.

It would be best to have regular watering and a controlled fertilizer regime up to the tree's maturity level. The tree copes with various temperature and humidity levels. Their slow growth should never be a reason to avoid planting them because they short-live other weak trees that grow faster. Considering the benefits of the tree, you can consider planting it as a long-term investment. The best time to plant the tree is during the fall or spring. Planting the tree also requires a big hole. You can prune the tree during winter if you wish to.

The Ginkgo Biloba tree is a non native species.