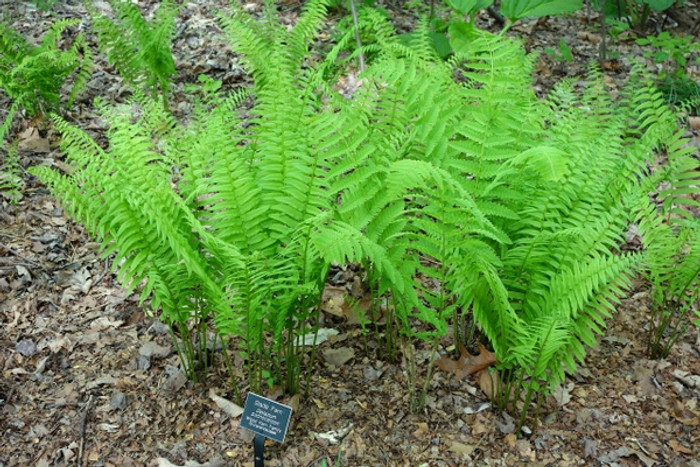 Product Code: OGF
Please enter
zip code
to know if this product is suitable for your location or not! Your Zone:
change my zone
USDA Zones 4-8

Ostrich Glade Fern is a native perennial fern that has beautiful green fronds. It does like moderate amounts of water but is somewhat drought tolerant. The Glade Fern ships bare root year round.
Zones: 4-8

The ostrich fern grows in the temperate, northern hemispheres of North America, Europe, and Asia.
The ostrich fern has a typical fern morphology with many centrally placed, curving stems with bi-lateral rows of leaves on both sides. Its color varies from the most common light green to a medium dark green. It has fronds that bear spores and may extend from 40-60 inches high from the ground and tapers in width as they approach the plant base and also the frond tip. The overall shape of the frond loosely resembles that of an ostrich feather. It grows in bunches and colonies and reproduces by both seeding and putting forth stolons underground that travel 6-8 inches from their origin to sprout a new plant.

The glade fern is a long and thin-leafed fern that grows in colonies with 5-6 fronds per group. This fern is native to the Eastern North American forests, and its range extends from Canada to the Texas coast. This plant ships bare root (root/rhizome only) with no foliage at time of shipment. Guaranteed to grow!

This beauty commonly known as either fiddlehead fern or ostrich fern, is a crown and colony-forming plant.

This fern prefers to grow near riverbanks, ponds, and lakes, therefore, it can form dense colonies resistant to flooding due to its immense love for water. Ostrich ferns are perfect for very moist and damp growing conditions. They grow during the autumn months, live throughout the winter, and release new spores in early spring. Fiddlehead ferns are common ornamental plants to have in any garden for a pop of bright, vibrant green colors.

Growing Zones:
Customer Reviews
5.0 Based on 7 reviews
Write a Review