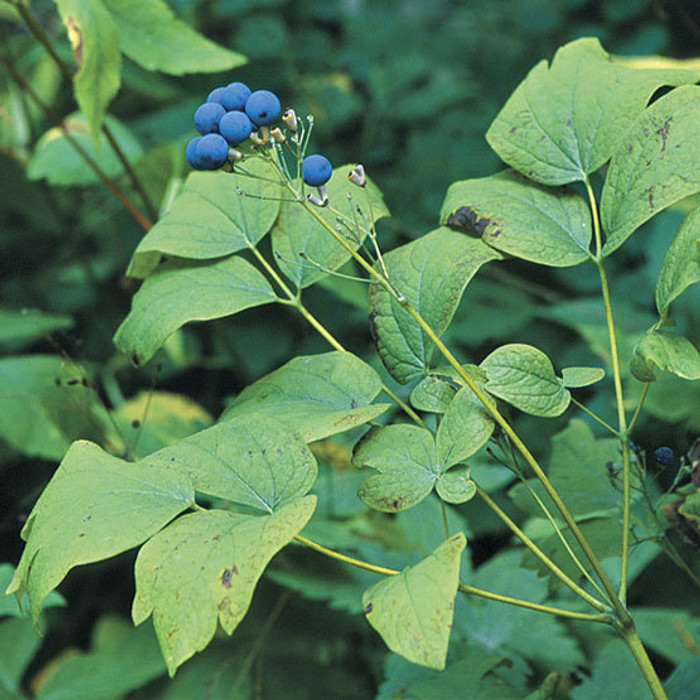 Product Code: BC
Please enter
zip code
to know if this product is suitable for your location or not! Your Zone:
change my zone
USDA Zones 3-9

Blue cohosh, Caulophyllum thalictroides, is a member of the barberry family of plants, which proliferate in the eastern region of the United States where rainfall is plentiful, and dense hardwood forests can give it slight shade from the hot sun. It gets its name from the pretty blue fruit that grows in clusters on the end of its stems covered in light green foliage after the tiny yellow flowers have fallen off in the spring. But some also call it by the name given to it by Native Americans, which is "squaw root."

This perennial grows up to 3 feet in height once it has reached full maturity. This usually only takes a season to achieve, so it is a beautiful addition to gardens which are newly planted and still a bit bare. It will produce the most fruit and grow faster if it is fertilized in the early part of the spring and later in the fall when it focuses its growth in its roots.

Blue cohosh can be planted by itself, but it works best when several of them are set side-by-side in a hedge because they help to pollinate each other this way.

And this ensures that they bare fruit. Those who have small container gardens can still grow them individually in a pot with good drainage out on their balcony or porch though. Woodland areas often have this wildflower growing under large canopy trees.

This plant is known for its medicinal attributes to pregnant women, especially its labor-inducing hormone balancing properties when it is combined with its close relative "black cohosh." So some gardeners grow large groups of it, which allows them to harvest some of the plant's roots at the end of each season.

Growing Zones:
Customer Reviews
5.0 Based on 2 reviews
Write a Review