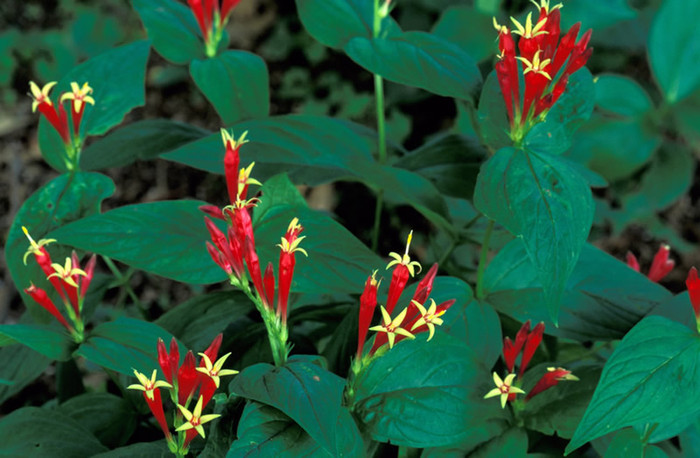 Product Code: INDPINK
Please enter
zip code
to know if this product is suitable for your location or not! Your Zone:
change my zone
USDA Zones 6-9

The Indian Pink is one of the loveliest and most popular wildflowers native to the Southeastern United States. It is a shade-loving perennial that can flourish under leafy trees, neighboring homes, or in other less sunny locations. Also known as the Spigelia marilandica, it is part of the tropical Logania family and prefers relatively warm, humid climates. It is primarily suited for USDA Hardiness Zone 6-9.

This native American wildflower can be seeded directly into the ground in the spring, though they can be slow-growing initially.

Gardeners will generally see the most blooms of the Indian Pink in May or early June, though it can continue blossoming in lesser quantities well into the summer.

It likes medium wet, well-drained soil, but is reasonably tolerant to dryer soil as well. It is excellent for gardeners looking to brighten up some darker areas of their garden, or as a border trim, but it can survive in sunnier spots as well, making it a versatile and hardy addition to any flowerbed.

A favorite of hummingbirds and butterflies, should reach a height of about a foot to a foot and a half once it has achieved full growth. Mainly healthy specimens might get as tall as two feet. The flowers are long and tubular. Contrary to its name, are dark red on the outside and bright yellow on the inside. The inside of the petals is only visible at the very tip of the flower, where it flares out like a small star. The leaves of this plant are also an attractive dark green color and grow directly from the main stem. The plants tend to be found grouped in leafy bunches, with the flowers reaching upwards at the tip.

Indian Pink are shipped bare root and show no foliage at time of shipment.

Growing Zones:
Customer Reviews
4.0 Based on 22 reviews
Write a Review